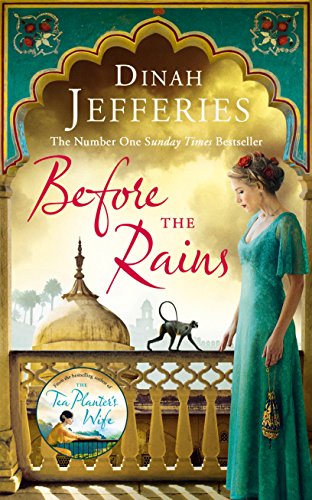 This time we're off to India no less. Be prepared for a magical journey.


A romantic, heart-wrenching tale of love against the odds from the Number One Sunday Times bestselling author
1930, Rajputana, India. Since her husband's death, 28-year-old photojournalist Eliza's only companion has been her camera. When the British Government send her to an Indian princely state to photograph the royal family, she's determined to make a name for herself.
But when Eliza arrives at the palace she meets Jay, the Prince's handsome, brooding brother. While Eliza awakens Jay to the poverty of his people, he awakens her to the injustices of British rule. Soon Jay and Eliza find they have more in common than they think. But their families - and society - think otherwise. Eventually they will have to make a choice between doing what's expected, or following their hearts. . .


Dinah Jefferies has truly mastered the skill of transporting the reader, both in time and place, in this case to Rajputana in India in the years before India gained her independence from Britain. In a few paragraphs the reader experiences the cultural differences between the two societies through the burgeoning relationship of Eliza, a photographer, and Jay, a member of the Indian Royal family.
I enjoyed watching the relationship develop and wondering if they would be able to overcome the barriers. Jay's brother provided an added threat and I found his mother intriguing. The book deals with some controversial topics such as the position of women, the custom of burning a husband's widow (as a punishment for 'allowing' him to die) as well as the political situation of the time. I found Eliza to be a strong and courageous woman in what was essentially a man's world - both the society she escaped from and the one she escaped to. All in all an engaging read that offers pure escapism.