I've had this book on my shelves for a long time - almost twenty years so thought it was about time we head over to Hong Kong. This book is set just before the handing back of Hong Kong to the Chinese and needs to be read in context. It gives a great insight into both the British and Chinese hopes and fears as well as prejudice and inherent racism on both sides. I found it a fascinating read despite the fact, or even because of the fact, that none of the main characters are particularly likeable. It is a novel of its time and does a good job describing the period. 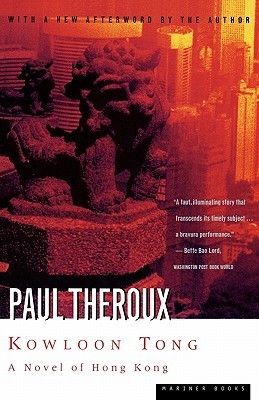 Ninety-nine years of colonial rule are ending as the British prepare to hand over Hong Kong to China. For Betty Mullard and her son, Bunt, it doesn't concern them - until the mysterious Mr. Hung from the mainland offers them a large sum for their family business. They refuse, yet fail to realize Mr. Hung is unlike the Chinese they've known: he will accept no refusals. When a young female employee whom Bunt has been dating vanishes, he is forced to make important decisions for the first time in his life - but his good intentions are pitted against the will of Mr. Hung and the threat of the ultimate betrayal.